A video shot by a Russian driver went viral in social networks: at night, two cats literally escorted a disabled dog across the road. The “humanity” of the furry volunteers has become legendary.

The video was recorded on a recorder installed in the car. The footage shows how two cats, without exaggeration, surrounded the dog, whose hind legs are dragging on the ground. The furry volunteers were clearly helping their friend get over the dangerous track. Cats were walking side by side with a disabled dog. The three of them ignored the approaching car and continued on their way in the headlights.

The men sitting in the car admired this support and their remarks show that they are under the impression of such mutual assistance of animals.

The video went viral and spread across social networks. Users comment on it, noting that the “humanity” of animals is an order of magnitude higher than that of humans. 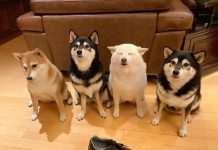 Shiba inu Hina is a professional family photo shredder. One look at her poses and you will understand why 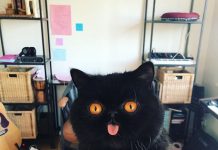 The developer showed his cat and scared people. It’s all about the devil’s eyes, and it’s impossible to look away from them